A river cruise towards a warm welcome on the Flemish waters.

Drop off the moorings and discover Flanders, a welcoming cross-border region of unexpected richness. The waterways of Flanders form the most densely inland waterway network in Europe. There are picturesque canals, winding rivers and waterways for transportation. This network lends itself perfectly to circuits of several days for holidays by boat.
A series of port cities will allow you to reach in a straight line the heart of cities important from the cultural and architectural point of view such as Bruges, Ghent, Kortrijk, Geraardsbergen, Brussels, Mons and Lille. Lovers of the nautical, maritime, gastronomic and historical inheritance will inevitably find their happiness on the waterways of Flanders. Also visit the regional park of canals and castles. Discover the rich natural heritage of the Yser valley, the Deûle, but also the Lys which has been and still is today the source of inspiration for good numbers of artists.

Bruges, the "little Venice of the North", the capital of chocolate: its 49 chocolate shops, its Choco-Story chocolate museum, chocopromenades, Beguinage and love lake, Bruggemuseum
Ghent, former drapery city: its drapery hall, its belfry (UNESCO World Heritage class), its S.M.A.K. (museum of contemporary art), its castle of the Counts, its Rabot (hydraulic ancestor of the lock)
Kortrijk: its belfry with the 48 chimes, its towers Broel, its churches Saint-Martin and Notre-Dame
Antwerp, Diamond Industry Queen: Diamond Museum, Notre Dame Cathedral, Town Hall, Aquatopia Futuristic Aquarium
Peruwelz: its castle of the Hermitage, its park of the Naiade, its museum of leather
Gastronomy: Belgian beers, chocolate, waterzooi

NAVIGATION INFO:
In April and October all locks and bridges are closed on Sundays and public holidays. Cruises from Nieuwpoort are round-trip 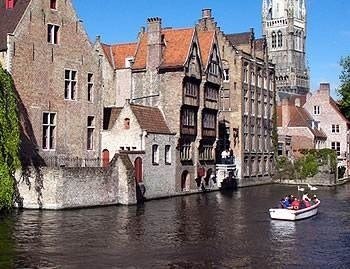 Les Flandres
Go on a week-long getaway from Nieuwpoort and visit the beautiful cities of Bruges and Ghent. Take the moorings and discover Flanders, a welcoming... see all bases

Discover the basics for your river cruise.